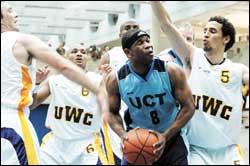 This being the last sports page in MONDAY PAPER for 2005, we thought we'd take you back over a choice sample of sporting highlights - and some lows - covered in our pages this year. This is by no means an all-inclusive list, so we apologise for those whose names or performances we omit. We also thank all the students and staff who kept us abreast of sporting performances, and look forward to working with you - and a few more clubs and individuals - again in 2006. In the meantime, we wish you a good break and a happy New Year. (We'd like to say break a leg, but in sport, unlike the stage, the odds are much better on that happening.)

Athletics: It's been a banner year for the club, and there's just no space to list all its high points. We think the win of the women's team in the Two Oceans Half Marathon race deserves a mention, though. As does the club's bevy of women stars - in event after event Unice Vorster (top right) and Lauren Stewart smashed their personal-best times, while javelin-thrower Odette Olivier - who set a UCT record before even making it into her first class - has hit a purple patch. Among the men, Dr Andrzej "AO" Okreglicki and Assoc Prof Kevin Rochford, seniors in the club, have again stood out. Okreglicki cantered more than 2 000km in official races, while Rochford, a sprightly 61, is setting a wealth of new UCT records in the Master's class for future sexagenarians to chase down.

Badminton: Doubles pair Samantha Oatley and Nicky Keitsile put in fine performances at SASSU this year, as did the mixed-doubles team of Keitsile and Phazha Pitso. Some top young players are heading UCT's way in 2006, so the club will be hoping for even better things.

Basketball: Good news: Five UCT teams made it into the playoff stages of the Western Cape competition. Bad news: Only two qualify for the finals - men's first team and the women's second - and neither pick up gold.

Bowling: GSB staffer Trish Steyn represents South Africa at the African States Tournament in Botswana in September, warm-up for the Commonwealth Games in Melbourne in 2006.

Cricket: The first team cruises to a win in the final of the WP one-day competition in March. And just two weekends ago, James Kuiper (top left), who scored 93 in that match, racked up 230 not out in one Saturday afternoon against United - he smacked 10 sixes - and then amassed another 71 not out in a game against Claremont the very next day. Rumours are it has something to do with exams being done.

Gymnastics: UCT win bronze at the SASSU games, as do the women in their event. And for once, the UCT women outnumber the men in the squad. 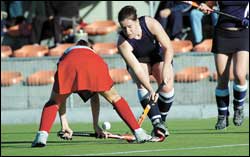 Hockey: It was a year of seconds for UCT. After holding sway in the WP league for four years, the men's first team finally ceded ownership of the title. The second team are relegated. And the women finish league runners-up to Stellenbosch again, but enjoy a moral victory - they get the better of Maties in a famous 1-0 win in the semis of the SASSU games.

Karate: The UCT men and women pick up a cache of silver medals at a noisy SASSU.

Kayaking: In July, six UCT students kayak the western coast of Lake Malawi, becoming the first group to cover the 800km stretch. And they do it in under a month.

Mountain and Ski (and orienteering): We have one name for you - Ake Fagereng (middle left). The Norwegian, an honours student in geology here, was runner-up in the Hout Bay Challenge and the Table Mountain Challenge, won the 80km Midnight Hell Run (in record time), is the South African orienteering champion in the short distance, was part of the UCT team that took honours at the 150km Wildman Challenge, overall champion of the Quantum Adventure Challenge, and with UCT cyclist William Robinson also finished top of the pile at the Atomic Mast Race. And he defended his Three Peaks Challenge title, while being included in an international team (from South Africa) that competed in the Red Bull Cape Town Man, an extreme kite-surfing, mountain biking, mountain running and paragliding relay race in Cape Town on November 19. And lest we forget, Peter Beighton, emeritus professor of human genetics, and his wife, Greta, won the over-70 men's category and the women's over-65 category at the SA Orienteering Championships. Jason Reid triumphed in the men's under-21 event.

Rowing: The UCT women take second place at the SASSU University Boat Race in September. So impressed are the Oxford and Cambridge teams that they challenge UCT, and SASSU winners Rhodes, to a race on the Zambezi. 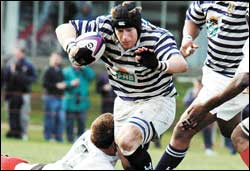 Soccer: Sorry boys, but the women, as in previous years, are again the shining light of the UCT stable. They best all other comers in the WP SASSU competition, and will now vie for national honours in December.

Sports climbing: No one went higher than UCT at the SASSU competition. Brothers Edvinas and Marijus Smigelskis each win gold and silver medals. Hurray to sibling rivalry.

Squash: It's two on the trot for the women's team as they successfully defend their WP league title. Suddenly the 13-year drought that went before doesn't look so bad.

Tennis: Game, set and two matches to UCT as the women's team wins promotion to the WP first league for 2006, as does the doubles team.

Wakeboarding: Hailey Koch makes her name in the women's open event at the WP championships, taking home a bronze medal.