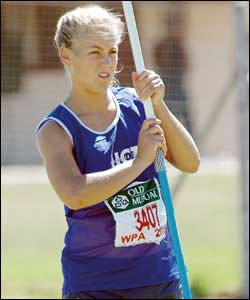 Odette Olivier is on a roll.

Early in November, the 19-year-old UCT javelin thrower was a last-minute entry at the wind-pestered junior meeting at Tygerberg-Northlink College in Parow. Good thing, too. Olivier managed a new-best throw of 45.61m.

That was nearly a metre further than her week-old UCT record of 44.69m, and moved her up to fifth on the national junior rankings for 2005.

It also means she's realised her year's goal to hit the 45m mark. That seemed out of reach after a back injury sidelined her for much of the season. Now she's going flat out.

Much of the credit, Olivier notes, must go to coach Frans du Toit, who left her run-up as is, but tweaked her throwing technique.

The rest of us should be so becalmed.