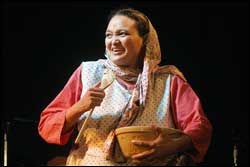 Musical duo David Kramer and Taliep Petersen's latest production, Ghoema, promises to be a festive season crowd-pleaser. The show takes an in-depth look at the music of Cape Town and how it derived its origins in the spice trade. In the 150 years after Jan van Riebeeck's arrival at the Cape, slaves were brought from Mozambique, Madagascar, India, Ceylon and Indonesia. They brought with them a diversity of languages, skills and culture, giving rise to a unique creole society that is celebrated here.

A ghoema is a drum made from a small wooden barrel or vat, and is small enough to be carried and played while walking. It is possible the word originated from "ngoma", which means drum in Swahili, a word that slaves from Zanzibar and Madagascar (who found themselves at the Cape) would have used.

The show also has a special UCT connection in that one of the narrators, Zenobia Kloppers, who plays the role of Dina, studied drama here. A talented singer, Kloppers lives in Stellenbosch where she runs her own production company. Another of the performers, Gary Naidoo, is also an alumnus and is known to South African television audiences as the prankster on the show Laugh Out Loud.

Ghoema is on at the Baxter theatre. Book through Computicket.