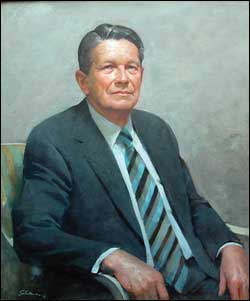 Alan Pifer, philanthropic leader, friend of UCT and past president of Carnegie Corporation of New York, passed away on October 31 at the age of 84. Throughout Pifer's career, his focus was on social justice and strengthening the rights of historically disadvantaged groups, including women.

Pifer also established the UCT Fund, which raises funds in the US to support black students and to promote the advancement and welfare of disadvantaged groups. Last year, UCT honoured Pifer by naming a grant from the UCT Fund after him to mark the university's 175th anniversary.

In addition, each year, a UCT scholar whose work contributes to the welfare and advancement of South Africa's disadvantaged groups gets the Alan Pifer Award, the most recent recipient being Professor David Chidester of the Department of Religious Studies.

Former vice-chancellor Dr Stuart Saunders said: "Alan Pifer had a deep commitment to UCT and to what it was trying to achieve. He believed passionately in equal access to higher education and to social justice, and worked incredibly hard to ensure that funds were raised in the US for disadvantaged black students at UCT. He was a man of real quality and UCT was indeed fortunate to have him as one of its closest and enduring friends. We will never forget him."

Beginning in the 1970s, Pifer was instrumental in reinstituting the Carnegie Corporation's involvement in South Africa after a long hiatus. At UCT in the mid-1970s, the corporation established the Second Carnegie Inquiry into Poverty and Development in Southern Africa to examine the legacies of apartheid and to make recommendations to non-governmental organisations that would support the goal of achieving racial and social equality in a democratic society.

Pifer was a founding fellow of the African Studies Association, and a member of the Management Committee for the US-South Africa Leader Exchange Programme and a trustee of the African American Institute.

During World War II, he served with the US Army 11th Armoured Division, holding the rank of captain at the time of his discharge in 1946 and taking home a Bronze Star he won in the Battle of the Bulge.

After retiring from Carnegie, he led a study of the "baby boomer" generation heading for retirement, which produced a book, Our Aging Society: Paradox and Promise (Norton, 1986).

He is survived by his three sons, Matthew, Nicholas and Daniel, two sisters and seven grandchildren.

This portrait of Alan Pifer (above) hangs in the Bremner building.