Nought for two for cricket 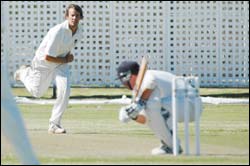 Plugging away: Dean Cook and the other UCT bowlers were willing, but couldn't topple the Bellville batting line-up.

The spectre of last season's forgettable two-day performance must hang over the cricket first team.

They lost their second match of the new two-day season, by five wickets to Jameson Bellville. UCT made 187/9 in its first innings, to which Bellville replied with 227/5.

The students needed a big tally in its second innings, but could only manage 162 all out, with the ever-dependable John Geoghegan top-scoring with 50. Bellville lost five wickets in their run chase, but quickly amassed the runs they needed to clinch the match, scoring 127/5.

If UCT could plead "ringer" in the first defeat to Tygerberg, there were no mitigating circumstances to be had this time around. Other than maybe, according to coach Brian McMillan, they're short of a wicket-taking bowler and experience in the batting top order.

McMillan has a trick or two up his sleeve though, promises club administrator Kobus Olivier.