Students make it four on the trot for UCT 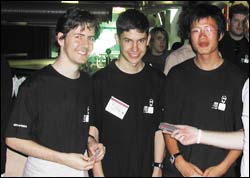 Two for two: Harry Wiggins, Marco Gallotta and Shen Tian have, as they did last year, taken top honours in the southern African computing contest.

Dedication and good coaching paid off big time for the UCT teams who took part in the recent southern African round of the International Collegiate Programming Contest of the Association of Computing Machinery, an event more commonly known as the ACM ICPC.

UCT hogged the honours and took six of the first seven places in the competition. This was also the fourth consecutive year that a team from UCT has won the regional contest.

The ICPC is a computer programming contest for university students in which teams of three have five hours to write programs to solve several problems using only a single computer between the three of them. This year, approximately teams from 71 countries on six continents will take part in regional contests worldwide.

Eighty of these teams will advance to the 2006 World Finals, which will be held in April at Baylor University in Texas in the US.

In this year's southern African regional contest, held just two weeks ago, 51 teams from nine universities vied for glory. No fewer than 14 of these teams were from UCT.

Members - at least the former winners among them - of the USCA were also heavily involved in writing software that was used to coordinate the contest across the four sites, as well as in setting questions.

On the day, all the UCT teams performed extremely well. Almost every team solved at least one problem, with most averaging two or three correct solutions.

In terms of national performance, UCT also excelled, with teams coming first, second, fourth and sixth among the

Much of the credit for this year's performance, says Donald Cook of the Department of Computer Science, must no doubt go to the two UCT coaches - past winners Bruce Merry and Carl Hultquist.

The organiser and site director was Chad Botha, president of the USCA. The competition was overseen by Dr James Gain of the computer science department at UCT.