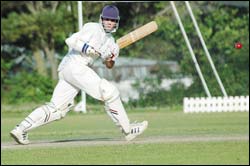 Basketball: The men's basketball first team have plenty of spilt milk to cry over. In the deciding clash against Cats in the best-out-of-three Super League finals of the Western Cape season, UCT somehow managed to let an 11-point lead - which they enjoyed halfway into the second quarter - slip through their fingers. They were still ahead six points by the end of that quarter, but then the side from the Cape Peninsula University of Technology (CPUT) tightened the defensive screws to turn the tables on them. Cats outscored UCT 21-9 in the third quarter to take a 61-55 lead. Things went from bad to worse for UCT, resigned to bootless long-distance shots by the fourth quarter, and finished 20 points shy by the final buzzer, losing the match - and the title - by

Volleyball: There won't be too much head-hanging at the Volleyball Club for not picking up any major UCT sports awards recently. They've just been named WP Volleyball Club of 2005 by the Western Province Volleyball Union (WPVU). And, for good measure, the club's Joachim Schuckmann, winner of a UCT Merit Award for sports administration in 2004 and 2005, received a Special Recognition Award from the union for his overall contribution to the sport and his role in rebuilding the UCT club, on its last legs but a few short years ago. The club received the WPVU accolade for its administration and performance on the court, ie entering and running no fewer than four teams in the WP league, making it the biggest club in the province. "We have come a long way in the past four years," says Schuckmann. In addition, the club assists in provincial volleyball activities and supports the WPVU in all its programmes. The club also boasts a strong development programme, a feature that will become compulsory for all clubs from next year. "So we're one up on other clubs," says Schuckmann. For the Recognition Award, Schuckmann, known as "Mr Volleyball" around UCT and as the go-to guy in the club, was singled out by the union for turning the club's fortunes around. In the process he mended quite a few bridges between UCT and WPVU. Erstwhile chair of the UCT club, he also acted as counsellor to subsequent chairs, Anneke Voigts and Shukri Toefy. Sadly, this may be Schuckmann's last year at UCT as he's thinking of heading back home to Namibia in 2006.

Cricket: UCT started the defence of their one-day title well enough, beating close rivals Alma in their opening match of the season. News was not that good in the longer version of the game, though - the side lost by 163 runs to Tygerberg in their first game of the two-day league. That doesn't mean UCT is doomed to repeat their poor performance of the 2004/2005 two-day season. Tygerberg upped the stakes for the game by including all-rounder Vernon Philander of the Cape Cobras - that's the silly name of the new WP franchise - in their line-up. Philander took nine UCT wickets, and bludgeoned 89 runs in the Tygerberg first innings. Best performer for UCT was Christopher Florence (above), who scored 32 in the first innings, and was defiant in the second, ending on 37 not out.