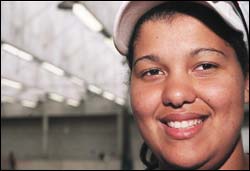 UCT's Unice Vorster just seems to be getting faster and faster. She set a new 10km PB of 37:43 when she finished fourth in the Harmony 10km race in Bellville on October 8, that time the best at the UCT club since 1993. On the same day, Will Robinson and Ake Fagereng took overall first and second spots, respectively, in the run-and-cycle event at the Atomic Mast Race.

The women's basketball second team, as they did last year, have again played second fiddle to Montana Vikings in the Western Cape Basketball Association (WCBA) finals. Vikings took the title after beating UCT in both the first and second games of the best-out-of-three series. The men's first side is still in it, though, if only just-just. After a 61-89 drubbing at the hands of Cats of the Cape Town campus of the Cape Peninsula University of Technology (CPUT) in the first match on October 2, UCT took the second on October 9 by 93-91, thanks to a desperate two-pointer in the dying seconds of the game. The deciding match was scheduled to be played on Sunday, October 16.

The UCT Judo Club made their mark at the recent South African Closed Championships on October 8. Organised by the Western Province and Boland chapters, four UCT judokas participated and won medals: three bronzes going to the women judokas: Shirvani Maharaj in the 48kg-division, Portia Tau, 52kg; and Bronwyn Boesack, 78kg. In the men's section, David Segwick took silver in the 60kg-division. Also on the mat were the club's coach for next year, Frank Steyn from Central Gauteng, who won gold in the 100kg-division, and UCT's Cathrin Welker, who represented the Western Province Amateur Judo Association as a referee.