Basketball clubs have glory in their sights 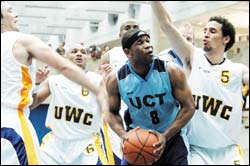 Lone wolf: Ringed in by UWC players, Tomi Amosun still has a go at the hoop.

It's too early to start counting their chickens just yet, but the UCT Basketball Club has good cause for celebration.

All five UCT teams that took to the court this year have made it into the semi-final stages of the Western Cape Basketball Association (WCBA) season, a first for the club.

In these three-match playoffs, the men's first team will go up against the University of the Western Cape (UWC) in the super league, the men's second team will play International Sports Federation (ISF) in the men's first league, and UCT Tigers are pitted against Vikings in the boys under-18 competition. Then, the UCT first team cross swords with ISF in the women's first league playoffs, while the women's second team take on UWC in the second-league competition.

Things didn't go all UCT's way in the first matches, though. Only the men's first and ladies second teams - the latter the sole UCT side to make it into last year's finals - won their opening ties, played on September 19 and 20.

The men, ranked top going into the playoffs, got the fright of their lives against a fight-to-the-bitter-end UWC, ranked fourth, however. UCT just scraped through to an 80-77 win.

"They came hard at us," says UCT coach Steven Hackner. "And perhaps we didn't respect them as much as we should have."

It's a lapse he was going to make sure his players didn't repeat in the second matches, played this past weekend, he promised.

The finals of the competition, again to be decided on a best-out-of-three basis, start on Saturday, October 1.