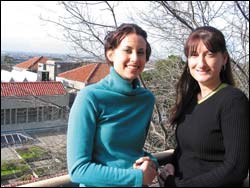 With the academic year getting into top gear, postgraduates students, preferably those whose research carries an African slant, are reminded to keep postamble in mind for submissions to their editorial mix.

Now into its second edition (it was launched last year), the online publication has covered some weighty topics, the bulk of the material gleaned from postgraduate students, either in the form of research essays and even papers from dissertations.

Though the focus is on the multi-disciplinary study of Africa through the arts, humanities and social science lenses, submissions need not be confined to the humanities faculty. Various voices are sought.

"We're looking for work of a high academic standard, work that is of value to the promotion of the multi-disciplinary study of Africa within the university environment," co-editor Kim Wildman said.

Based in the Centre for African Studies and published bi-annually, the online journal provides a space for postgraduate students to feature their work; this in the form of essays, creative writing, visual essay and even the use of digital film and sound.

postamble is peer reviewed and edited by an editorial board of academics from across the faculties and from institutions beyond UCT's campus.

Wildman, a journalism graduate of the University of Southern Queensland in Australia, is pursuing a master's degree in public culture in the Centre for African Studies. Himmelman arrived in South Africa in February from New Hampshire's Dartmouth College, to begin a master's degree in African literature.

Both are enthusiastic about the journal's potential and scope, hoping it will attract submissions from African universities and beyond - and eventually grow to include a printed version.

They're keen to ensure the journal's editorial mix is well spiced. Besides topical book reviews, there are articles on contemporary culture, politics, architecture and social anthropology.

(The deadline for submissions for the third edition is 30 September. Supervisors please remind students to submit. See http://www.africanstudies.uct.ac.za/postamble for more information.)