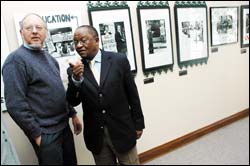 Looking back: DVC Prof Martin West and VC Prof Njabulo Ndebele at the opening of an exhibition celebrating student protest at UCT.

A new photographic exhibition, on show in UCT's administrative headquarters at Bremner, is glancing back at student protest at the university during apartheid.

The exhibition, titled Redefining Moments: Five Decades of Protest of UCT, features images of students opposing all kinds of issues on campus, ranging from the 1959 Extension of Education Act, to academic freedom and institutional autonomy, and access to higher education.

The exhibition is the second arranged in recent months by the Transformation Office as part of its ongoing programme to spark discussion on transformation at UCT. The first was the highly debated but well-received series of sketches on disabilities by artist Gabriel Clark-Brown.

The choice of Bremner - the exhibition is mounted just outside the Senate Room - as gallery is no coincidence, says Nazeema Mohammed, manager of the Transformation Office. The building's hallowed halls have been the setting for much protest activity over recent decades. Such as when students staged a marathon nine-day sit-in in 1968 to contest Council's decision - after some browbeating from the state - to back out of the appointment of one Archie Mafeje as senior lecturer in the Department of Social Anthropology.

"This space here in Bremner is considered a symbolic space," says Mohamed. "It is considered to be the locus of power. To locate discussions on transformation in the Senate Room is symbolic in that it shows that those in power are willing to engage with change."

And there's plenty of reflection in the exhibition.

"This exhibition is an attempt to review those moments in our history that have shaped who we are as an institution," says Mohamed.

The official opening of the exhibition, on August 31, was followed by a discussion chaired by the vice-chancellor, Professor Njabulo Ndebele. Speakers included Mary Simons, senior lecturer in the Department of Political Studies, and Bongani More, former student leader here and currently with the Department of Public Works.