Catching a tide at the flood 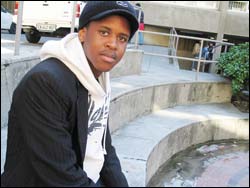 It's a rigid pattern (the water is a swimming pool, frigid in deep winter) of life for the second-year BComm (accountancy and economics) student from Westville High in Durban.

But you pay your dues for a spot in the U20 South African water polo squad. And more so with the junior world championships looming in Argentina in October. Mlisana is also the only Western Province player to make it into the squad of 12.

Black water polo players are rare, with water sports still needing plenty of work in terms of building a representative pool of talent. Mlisana started out as a swimmer at Westville junior, progressing to water polo in high school.

A good track athlete, he found the strength he developed in his legs helped in the pool. And with a goal to defend, the higher out of the water he can tread the better.

He smiles at stories of keeper training techniques. Yes it's all true: the weight belts worn at practice, the benches held above the head as you tread water across the pool.

He first made the KwaZulu-Natal U14 team in grade nine and the U15 South African side a year later. At the end of matric in 2003, Mlisana made the South African U20 squad. Last year the team toured to Poland for a six-nations tournament.

He was selected for the UCT first team last year, coached by Matt and Nicholas Kemp, and was reselected for the SA U20 side again in March. The coach is Peter Lavett, who presides over the two-weekly training camps around the country, nurturing and nursing his charges.

There's a lot of pressure on the keeper. But Mlisana seems unruffled.

(Mlisana has the opportunity of a lifetime to compete at the junior world championships in October. But he needs sponsorship. If you can help or know of someone who can assist, please contact him on or e-mail mlsluk001@mail.uct.ac.za.)