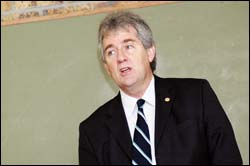 Neo-liberalism goes under the spotlight

Workers' World Media Productions will host a public lecture, Neo-liberalism and Culture in the 21st Century by Jan Nederveen Pieterse at UCT this week. The lecture will be held in lecture room 3 in the PD Hahn Building on upper campus on August 3 from 13h15-15h00. Pieterse, professor of sociology at the University of Illinois Urbana-Champaign, specialises in transnational sociology with a focus on globalisation, development studies and intercultural studies. He is currently associate editor of Ethnicities, Futures, the European Journal of Social Theory, Third Text, and Culture & Society. His recent books include Ethnicities and Multiculturalisms: Politics of Boundaries, and Globalisation or Empire? To attend, RSVP to admin@wwrp.org.za or fax

Mike Deeks, president of the South African Institution of Civil Engineering (Saice), and fellow executive members visited UCT in July to build bridges with second- and third-year civil engineering students just entering the discipline. In addition to speaking on the role of Saice and the benefits of joining its fold - the institution boasts a membership of some - Deeks also shared some general thoughts on civil engineering in South Africa. Things are looking up for the industry and prospective civil engineers, he said, with a host of multi-billion rand projects on the cards in both the private and public sectors. "You should pat yourselves on the back for choosing civil engineering," he told students.

Forest Hill residence, with the Student Development & Services Department, is hosting the inaugural JD Baqwa Memorial Lecture on Wednesday, August 3. The lecture, to become an annual event, is named in honour of the late Prof Jeffrey Dumo Baqwa, the first incumbent of the chair of primary health care in the Faculty of Health Sciences and also warden of Forest Hill residence. Baqwa died in 2001. The Most Reverend Njongonkulu Ndungane, the Anglican Archbishop of Cape Town, will speak. His lecture is titled A Call to Full Humanity: Reflections on Dreams, Values, Faith and Respect. The event takes place in Jameson Hall, and starts at 18h30 for 19h00.

Lesley-Ann Foster, a current Executive MBA student at the UCT Graduate School of Business (GSB), has been nominated for Nobel Peace Prize for her valuable work as the founder and director of the Masimanyane Women's Support Centre in the Eastern Cape. She is part of a select group of 1 000 women who have been nominated in 2005 to call attention to the important but often unrecognised role of women working for peace, justice, political rights, education, and security. Foster says she had heard about the founding of the Women for the Nobel Peace Prize project in 2004 but the news of her nomination came as a surprise. "I think it is very positive for women all around the globe that there is such an international campaign to raise their profile, and was really shocked to learn I was one of the nominees. It is a great honour, but more importantly, I think such a nomination is symbolic - the value of the Nobel nominations is not in the prize, but in the acknowledgement of women and the work they are doing." 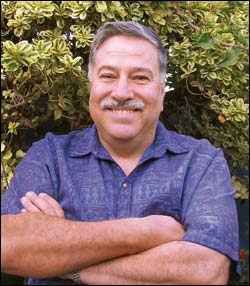 Tomorrow, August 2, is Professor Peter Klatzow's 60th birthday concert, a programme that will include his 2nd and 3rd String Quartets (played by the South African College of Music's eminent Sontonga Quartet), the premiere of his second piano sonata (dedicated to, and played by, FranÃ§ois du Toit), another new work, Sound Blocks, played by Adrian More, and a set of variations on the theme by Paganini, played by Avigail Bushakovitz and Klatzow himself. You can book at Computicket. All seats are R40. Students and senior citizens pay R25 on presentation of valid ID. UCT staff pay R35 at Baxter terminals only, on presentation of a staff card.

SACM staff: R25 at Baxter terminals only, on presentation of staff card.