Business as usual for new-look CPS 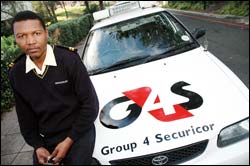 It's business as usual for Campus Protection Services (CPS) following the merger of Securicor and Group 4 Falck. The new security company is called Group 4 Securicor.

"We would like to inform the UCT community that the merger is now complete and CPS is operating as normal," explained CPS operations manager Stuart Wragg.

"Our structures, staff and services have remained the same, the only change is in the company's branding. Staff uniforms will also change but this will occur later in the year."

As mentioned in the Group 4 Securicor internal newsletter, Indaba, the company's new logo combines elements of both Securicor and Group 4 Falck to create an identity that looks to the future and not the past.

The new logo consists of the G4S abbreviation for Group 4 Securicor, with the 4 reversed in white on a red background.

Due to the merger, Group 4 Securicor now forms one of the largest global networks of security operations worldwide, with full- and part-time employees in more than 100 countries on six continents.

In South Africa, the company employees a staff of 16 000 and focuses on guarding, alarm and response services.