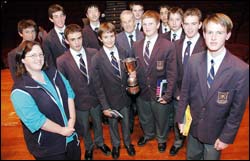 The mathematics department broke two noteworthy records this year at its 29th UCT Mathematics Competition - the event clocked more than enrolments for the first time (storms meant that only about could get here, though), and 133 schools in all entered, another high.

Last week, the department trumpeted the winners of that bumper event at an awards ceremony at the Baxter Theatre Centre. Among the guests were Minister of Science and Technology Mosibudi Mangena, and Michael Mali and Ken Finlay, representing sponsors Oxford University Press and Casio respectively.

On the evening, the UCT department made Gold Awards to the top individuals and two-member teams from each grade, and winners also pocketed high-end calculators from Casio. School prizes, in the form of Oxford science and maths books, also went to the top pupils in every non-Gold-winning school that had entered at least 10 individuals.

As UCT's Professor John Webb pointed out, a number of students feature at the ceremony every year as they pick up awards in each new grade. This year, though, there was at least one new face. Twelfth-grader Arne Smeets is a Belgian currently on exchange at DF Malan High, and was the only pupil to chalk up a perfect score at the maths competition.

Melissa Munnik, a grade-10 pupil from DF Malan High in Bellville, won the memorial Diane Tucker Trophy as the top girl in the competition. Cravenby Secondary School in Parow walked away with the UCT Trophy, awarded to the best performance by a school that has made no more than three appearances at the competition.

Rondebosch Boys' High once again won the contest's choice award, the Mona Leeuwenburg Trophy, named after one of the founders of the competition and made to the top-scoring school.

The ceremony also allowed the department to sing the praises of some of its high-flying regulars - students who cut their mathematical teeth at the UCT competition and, under the wing of the department, have now earned themselves spots in the South African teams to compete in some major international events this year. Charles Bradshaw (Rondebosch Boys'), Ralf Kistner (Paul Roos) and Gayle Sher (Reddam House) are half of the national team that will be pitted against the world's best in the International Mathematical Olympiad in Mexico, and were handed their blazers on the evening.