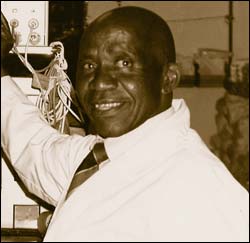 In 2003, UCT awarded an MMed (hon causa) to Naki, who had no formal education but who became highly skilled in the craft of surgery. He passed on these skills to generations of surgeons, some of whom went on to take up academic positions around the world. At least a dozen became professors of surgery and heads of department in places as far afield as Tokyo and Nashville in the USA.

Born in 1926 in the district of Centani in the Transkei, Naki was first employed at UCT as a gardener. The (then) professor of surgical research, Robert Goetz, attracted him to the research laboratory where he anaesthetised animals and helped with the experimental surgery.

In the mid 1950s, Barnard returned from the United States where he had learned the technique of cardio-pulmonary bypass and open-heart surgery. Naki assisted with this research, which Barnard was to take into the clinical setting at Groote Schuur Hospital, and continued to work on heart, liver, kidney and other transplant research during this pioneering period. When asked how he had learned all the surgical skills without formal training, he replied: "I stole with my eyes".

As head of the Liver Research Centre, Professor Ralph Kirsch got to know him well.

"He was one of those remarkable men who really come around once in a long time. As a man without any education, he mastered surgical techniques at the highest level and passed them on to young doctors. I don't think that happens very often anywhere in the world," he said. "He was quite tough on the youngsters. He demanded the highest standards and was a hard taskmaster.

"In his retirement he collected money for a rural school in the Eastern Cape and he used to do the rounds of all the doctors that he had trained. He would arrive once a year and there was no getting out of it. You knew you were going to give, you gave, and a few weeks later you would get a letter from the principal. He was an extraordinarily fine, charitable man."

Professor of Medicine Solly Benatar said: "Hamilton Naki was a special man - in my view one of the world's true gentlemen. During his long career at UCT he set a fine example to all with whom he worked. He was also a proud and honourable family man.

"In the years in which I participated with other colleagues in his medical care, I got to know him as a man of great courage, strength, warmth and dedication. He endured his physical ailments with patience and great dignity. He had a good sense of humour and always had a wise word to offer in conversation that reflected the way he lived.

"Hamilton Naki was a proud and distinguished member of UCT and it gave me and many others great pleasure that his work was recognised through several appropriate and prestigious awards. I shall remember him with great affection."

Deputy dean and former head of surgery, Professor David Dent, said: "He was a superb surgical technician who had magic surgical hands. He was one of nature's gentlemen."

The Naki family will hold a memorial service on Jun 14 at 18h30 at the Malangeni church, Washington Street, Langa.