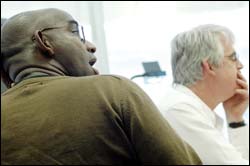 UCT alumnus and New York-based pianist Kathleen Tagg will be performing on June 4 in a Nazareth House candlelight benefit concert at the Old Town House on Greenmarket Square. The concert will also feature Cape Town Opera star Zanne Stapelberg, one of the most sought-after artists on the South African opera circuit. Stapelberg holds the coveted Best Young Opera Singer award from Friends of the Opera (2001), and has performed internationally in William Kentridge's European tour of his performance art piece, Confessions of Zeno, composed by Kevin Volans. The concert starts at 19h30. Tickets are R150 and include an elegant finger supper and fine estate wines. There is safe parking on the Square. For enquiries and bookings contact Justine or Fay tel or cell

The author of a controversial biography on Nadine Gordimer, Ronald Suresh Roberts, was on campus last week at the invitation of the Department of Political Studies where he addressed a lunch-hour gathering on the topic of literary and political biography. In his talk, Roberts took a critical view of William Mervin Gumede's book Thabo Mbeki and the Battle for the Soul of the ANC, as well as Judge Edwin Cameron's autobiographical Witness to AIDS. Roberts, whose Gordimer book is due out soon, said his next project was an "essay" on Mbeki opening with an epigram taken from JM Coetzee's Heart of the Country which reads: "How can I be deluded when I think so clearly?".

The UCT Drama Department presents BOPHA! at the Little Theatre, 37 Orange Street, Gardens from May 28 until June 3. Written by Percy Mtwa, the play explores the situation black policemen found themselves in during the apartheid era. A series of kaleidoscope sketches depict the policemen's passion for their work and the frustrations and anxieties they encountered in their families and communities, brought about by the political pressure at the time. Mtwa's craft in writing explores simple ways of telling the story with minimal dialogue and the use of music and mime. In 1993, the play was adapted into a feature film starring Danny Glover in the lead role and was directed by Morgan Freeman. Tickets may be booked by calling tel or by e-mail scole@hiddingh.uct.ac.za.

Professor Peter Klatzow, the world-renowned South African composer, is to receive a special Johannesburg tribute in a celebratory concert to mark his 60th birthday. The concert tonight (May 30), jointly presented by the Apollo Music Trust and the Wits School of Arts of the University of the Witwatersrand, includes the choral works Prayers and Dances of Praise, and the inspirational Mass for Africa, as well as other shorter instrumental and choral pieces. Klatzow was born and educated on the Witwatersrand, and continued his music studies overseas at the Royal College of Music in London, and with the legendary Nadia Boulanger in Paris. While at the RCM, he won the Royal Philharmonic prize for composition, which was open to any Commonwealth composer under 30. He worked as a music producer at the SABC and in 1973 he was appointed to the staff of the University of Cape Town, where he is currently Professor in Composition. Klatzow is one of the few South African composers to achieve international recognition. His works have been honoured with prizes all over the world.