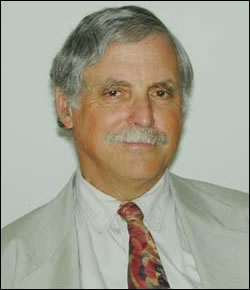 The prestigious international award is in recognition of Helman's pioneering contribution to the discipline, which involves a cross-cultural study of health, illness and medical care.

Helman's contribution includes writing the standard textbook Culture, Health and Illness, which has been used in 39 countries, including South Africa, since 1984.

Helman graduated with a MBChB from UCT in 1967 and went on to complete a degree in social anthropology at University College, London.

He is currently based in London where he is a senior lecturer in the Department of Primary Care and Population Studies at the Royal Free and University College Medical School, and an associate professor of medical anthropology at Brunel University.

His autobiography Suburban Shaman: A Journey through Medicine was published in South Africa last year and includes a section on his UCT experiences. 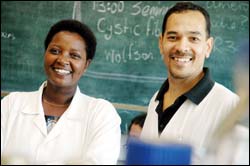 Postdoc fellow Dr Lester Davids and PhD student Purity Macheru (above right and left) of the Department of Human Biology did UCT proud at the recent 35th Conference of the Anatomical Society of Southern Africa, winning two prized awards at the event. Davids walked off with the Bob Symington Award for the best overall presentation for his paper on Skin deep: the effect of a skin lightener on melanogenesis, in which he dealt with the toxic effect of skin lighteners on skin cells in an African setting. Macheru, currently working in the lab of Professor Sue Kidson, received the Antoinette Kotze Award as best first-time presenter for her paper, The morphogenesis of the iris in the chick : A histological and cell proliferation study, outlining her work on eye development in the context of early eye disorders such as glaucoma. The conference was hosted by the University of the Transkei - soon to be the amalgamated Walter Sisulu University - in Buffalo City in the Eastern Cape from