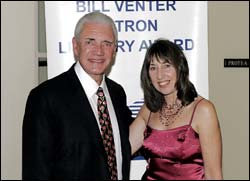 Though there has been an embargo on the announcement since December, Watson says she is "extremely honoured". The prize carries a purse of

"It's a very competitive award," she added.

Watson won the Department of Science and Technology's Distinguished Woman Scientist Award in 2003.

Her 177-page work explores the way planning practices in Cape Town have been shaped by history and prevailing practice, even as change occurred, and by a rapidly-changing context characterised by a globalising economy and new systems of governance.

Described as a "unique study", a "landmark study", and an "outstanding contribution", Watson is gratified that the award has drawn attention to planning and the problems with South African cities.

The panel of judges who sift through the entries is drawn from a wide group; it is chaired by a judge of the South African bench and includes nominees from the Human Sciences Research Council, the Council for Scientific and Industrial Research, as well as the South African Universities' Vice-Chancellors Association.

International and local reviews of Watson's book have been equally generous in their praise.

Reviewing the book for Urban Forum, Gustav Visser writes: "It is not often that South African urban and regional planners bring to press single-authored books and seldom of the quality of Watson's Change and Continuity – This is one of the most readable, informative and excellently-researched books to have emerged from the deluge of research focused on the multi-layered South African urban transition of the past 10 or so or years."

Heeding the maxim: publish and publish again, Watson has another book in the pipeline, a co-authored volume on planning in South Africa over the past 10 years, written with colleagues from three local institutions, and also destined for Routledge publishers.

The Bill Venter/Altron Literary Award is made annually on an alternating basis for contributions from humanities and the natural sciences. The award strives to reward publications that sketch issues of national interest, through a series of award-winning books, to determine and improve the standard of specialised works published by university and university of technology researchers.

Besides her research and writing, Watson is upbeat about a possible new cross-faculty initiative; a new research centre, the Centre for Cities in Africa, which could mark a collaboration between the three local universities. Already money has been raised in the United Kingdom for a fellowship programme at master's level. There are plans to apply for National Research Foundation Centre of Excellence funding next year.