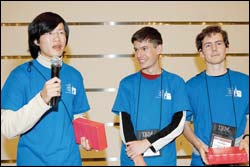 They're on top of the world, having brought home the first Parallel Challenge Ballgame title in their luggage.

They scooped the first Parallel Challenge Ballgame award, not bad for the Africa/Middle East regional champions, one of 78 teams chosen from a field of 3 150, representing 1 412 universities around the world.

Sponsored by IBM, the Parallel Challenge Ballgame is a programming contest that runs on the IBM Blue Gene multiprocessor computer, the fastest machine in the world. With 228 000 processors, Blue Gene is one up from Big Blue, the supercomputer that beat world chess maestro Garry Kasparov.

It was the first time the challenge formed part of the contest, held at Pudong University in Shanghai. Though the Chinese team won the overall prize (they cracked eight of the ten questions), the UCT team did well, said coach and computer science lecturer, Donald Cook.

"The contest is seen as an important yardstick of the level of expertise achieved by the students," he added. "The top students in the competition are offered opportunities in some of the most important IBM laboratories in the world."

There were other highlights for the UCT students: a seven-minute trip on the Maglev train from Shanghai to the airport. The train travels along a magnetic field, the only one of its kind.

"After three minutes you're travelling at 431km an hour - but you can't feel the acceleration. It's all computer-controlled," Cook said.