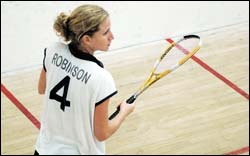 March 9 was a busy day for UCT sports as a score of clubs kicked off their 2005 seasons. We've selected a couple of teams - by no means a comprehensive list - and look at their prospects for the year ahead.

What happened in 2004: Finished third in the WP A1 Super League. Beat Maties in the intervarsity, for the first time in 14 years (and 42 years since they'd managed to do so in Stellenbosch).

What's changed since then: Haven't suffered too badly from 2004 graduations, although have lost key players like James Richards and David Edgar.

What's going to help: "Veterans" like rugged captain Dave Ricketts and the towering Immanuel McKenzie are still there, and the team boasts some very promising new players. Also, the side spent time at the Sports Science Institute and had a pre-season camp - a first - so they're certainly serious this year.

Bumps in the road: A more professional approach from all the teams in the league, says Le Roux. "There'll be no easy games this year." Players to keep an eye on: Centre David Clayton.

What happened in 2004: Finished runners-up, by some margin, to Stellenbosch in the women's Grand Challenge League. No-one else in sight of UCT, though. Made short shrift of all comers in Sassu B competition, earning promotion to A-event this year.

What's changed since then: Lose some, win some. Graduation cost the side a few old hands, but a core - the likes of captain Natalie le Brun, defender Tammy Kruger and prolific goalscorer Leshane Luscombe - remain. They're being joined by some up-and-coming young players.

Goals for 2005: "To continue to loosen Maties' stronghold on the Ladies Grand Challenge trophy," says coach Charlie Stuart. And a top-four position at Sassu will not go amiss.

What's going to help: The blend of youth and experience. The positive team vibe. And the growing competition for spots in the side means players are always striving to give their best.

Bumps in the road: "Having finished second last year, one automatically becomes a target for the chasing teams," says Stuart.

Players to keep an eye on: SA player Liesel Dorothy, of course, but she'll be missing for parts of the year. And the young players who have some big hockey boots to fill.

What happened in 2004: Finished in fourth spot in WP Volleyball Union league.

What's changed since then: There's been no major loss of players over the summer break. Big news is the appointment of Seraj Toefy, former national player and a respected figure in volleyball circles, as coach.

Goals for 2005: The team makes no bones about what they want to achieve this year - win the league.

What's going to help: That new coach, and the growing interest in the sport at UCT. So players have to fight for a place in the side.

Bumps in the road: Timing of games in the evenings. That means long nights away from the books, which may make parents edgy.

Players to keep an eye on: Shukri Toefy and Lloyd Brady both played for WP at school level.

Results of first match: Two matches, actually. Beat both Pentech and Cape Tech sides by 3-0 on the first day of the season.

What happened in 2004: A year to forget. The side won only one match in the Western Province Super League, and was relegated to the A1 league this year. They did breeze to victory in the Sassu B competition, though, and was bumped up to the A event for 2005.

What's changed since then: Major culling. Five of the seven first-team members have moved on, as did coach Alfreda Luyt. In comes new coach Louise Cameron and at least five young replacements.

Goals for 2005: To steady the ship before looking at promotion back to that cutthroat Super League, says club president Toni Waywell.

What's going to help: Players are responding really well to the new coach, says Waywell. And Keeyan Dick and Lyndall Daniels - the two survivors from last year - are around to give the newbies a hand. "I have a really nice little team here," believes Cameron.

Bumps in the road: It's going to take time to gel.

Players to keep an eye on: Stalwart Keeyan Dick will be crucial to the team's success, while among the new players Nosisi Dimba shows plenty of promise.

Results of first match: A 13-33 defeat to the University of Western Cape men was no surprise, but the side will have learned a lot.

What's changed since then: No change in the line-up. Lusaseni, one of the top players in the province, is going to cut back on her sport, though, and spend more time with her books. That will allow national school's cap Andrea Naidoo, a first-year student from Durban, to step into the breach occasionally.

What's going to help: Aling, Bonora, Lusaseni and Robinson have now played together for three years. That bond will come in handy. "We have a very motivated team, and we all motivate and encourage each other," says captain Aling.

Bumps in the road: Some of the other sides have beefed up their squads over the break. "It's going to be a different league altogether," predicts Robinson.

Players to keep an eye on: Rookie Andrea Naidoo obviously knows how to play. And Robinson, who's taken over the number one spot in the side from Lusaseni, has been working hard at her game.

Results of first match: Three wins in three matches is the ideal start to a title defence.

What happened in 2004: Won their fourth Grand Challenge title in as many years. Had to share the spoils at Sassu after the final was washed out. Sadly, the side failed to retain their Champion of Champions title, bowing out in the semis.

What's changed since then: Have lost some very good players, which is par for the university course, but also picked up some very good replacements, including Canadian international Steve Davis and Chris de Lange who's moved from Stellenbosch.

Goals for 2005: Winning the league four years in a row means everyone else is foaming at the mouth and keen to unseat UCT. "Our primary goal is to make sure we stay at the top," says coach Pierre le Roux. Also, the club wants to build a strong second team, which currently competes alongside the first team in the Grand Challenge competition. "They're our building blocks for the future," notes Le Roux.

What's going to help: The team will rely heavily on star performers like Andrew Cronje and captain Paul Blake, both named for the national squad, and Davis and De Lange. Also, a host of players are good enough to have been selected for provincial and national junior teams.

Bumps in the road: The other side of the coin. With so many players due to be called up for national duty - at least four will be heading to the Junior World Cup later this year - UCT will often have to field makeshift teams. "When they're here for us, it'll be great," says Le Roux. "There's just no guarantee that they will always be here."

Players to keep an eye on: Adam Wilson. Not yet named for a national team, but this could well be his here, says Le Roux.

Results of first match: Not too many worries as first side beat WP Cricket Club B 2-0. The second side went down 1-3 to WPCC A, though.