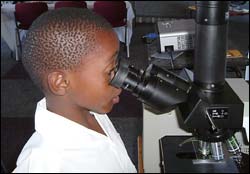 Wide-eyed: A local schoolboy looks at life at a microscopic level.

Bevvies of round-eyed scholars mingled with teachers, exhibitors and other science aficionados at the recent Sasol SciFest in Grahamstown, minds awash with the wonders of protrons and neutrons. UCT's science faculty was well-represented this year, choosing not to mount exhibitions but rather to hold seven workshops for pupils instead.

Exhibitions have a short shelf life, says zoology's Professor Anusuya Chinsamy-Turan, one of the keynote speakers at the festival. Each of the workshops has a life of its own and providing important resource material for teachers at the SciFest.

"We can use these exhibitions for our Science Day and for Open Day at UCT," she added.

The SciFest theme this year, Celebrating Symmetry, was a fitting reminder of the centenary of Albert Einstein's Miracle Year in 1905, a year he said "a storm broke loose in my mind". In the space of one year he proved that atoms exist, devised the theory of relativity (e=mc2) and provided the building blocks of quantum physics.

A world authority on dinosaur bones, Chinsamy-Turan spoke on unravelling the biology of dinosaurs and other extinct animals, while Ackermann spoke on human evolution, past and present.

As usual, a supportive group of postgraduate science students made the journey to Grahamstown, underpinning UCT's presence there.