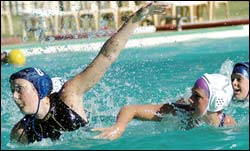 As their male counterparts did towards the end of last year, the water polo women's team is taking the long view.

Previously, the club could only field one women's team, unlike most of their rivals. But with a score of first-year students signing up recently, the women are now in a position to register another squad for the current WP competition. "The club is pretty strong this year," says coach Matt Kemp.

To make sure, however, that the younger players are not just thrown in the deep end - while still getting first-league experience - the club has split the old squad and established two evenly-matched teams. These UCT sides are now competing with the formidable Riverside and Maties outfits, who also boast two teams apiece, in the summer competition.

Much as with the men's sides, who adopted the same strategy, there have been teething problems. The results were not forthcoming early on, with both sides losing their first two matches. But even those games were close-fought affairs, says Kimberly Schmidt. "It's just a matter of getting used to playing together."

There are signs, however, that the teams have turned a corner. The "second" side chalked up its first win on February 26, convincingly beating Silvertree B 4-2.

That victory could be just the lift-me-up the UCT teams need to turn their seasons around.