Cricket team under the gun in WP league 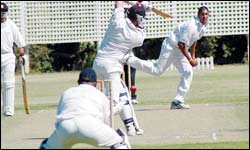 On edge: Rory Kleinveldt (bowling) in action in the one-day match against Fish Hoek, which UCT won easily to qualify for the semi-finals of the club tournament.

It's hardly been the cricket first team's most memorable season, with a ragbag of two-day results leaving the side stranded in sixth place on the Western Province log and well out of title contention.

And the team's unlikely to turn its fortunes around any time soon, going by a nondescript performance against Pinelands on February 19. UCT was bowled out for a measly 109 early on the first day of the match, only Farhaan Behardien (48) sticking around for any considerable time. Pinelands then raced to 207 all out - UCT's Western Province regular Rory Kleinveldt took four wickets for 72 runs - and by stumps had reduced UCT to 15 for two, and a mountain to climb on day two.

UCT has fared much better in the one-day version of the game, though, and reached the semi-final of the club tournament by beating Fish Hoek on Sunday, February 20. But even that was touch and go. Fish Hoek made short shrift of the UCT top order, still shaky from the Pinelands game. It was up to the middle order to right the ship, with Graeme Marais (73), John Geoghegan (38) and Behardien steering UCT to a defendable 224 for nine. Bobby Dodds (4/21) and UCT's player-of-the-weekend, Behardien, (2/30) then got stuck into Fish Hoek, bowling out their rivals for 156, still 68 runs short of the target.