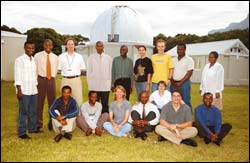 Of the 11 honours graduates from last year, nine went on to MSc this year, and they were joined by a further five students from other institutions.

The unique feature of the Nassp MSc is that the coursework is done at UCT while the students spend their time at other institutions in the consortium. Two MSc students went to the Free State University, one to Wits, two to KwaZulu-Natal (one to Maritzburg and one to Durban) and two to UCT's astronomy department. Another candidate stayed within UCT's mathematics and applied mathematics department, one student joined up with the Hermanus Magnetic Observatory (HMO), a National Research Foundation research facility, one went to Unisa and another accepted a position at Cambridge University.

When Nassp kicked off in 2002, there were 13 partner institutions. Since then, more have joined, demonstrating the model's success. As director of this postgraduate programme, Associate Professor Peter Dunsby said: "It was critical that we could show that the students who joined up were not lured only by the city's beaches and mountains but that science was their most important consideration. They chose those institutions because they had the best people in their chosen research area."

Some of the top students have been awarded prestigious Stobie-SALT Scholarships in Astronomy and Astrophysics, which allows them to study at partner institutions abroad: Dartmouth and Rutgers in the United States, and Southampton in the United Kingdom.

Thus far, a crop of 10 new master's students is expected for next year, recruited mainly from the current honours group at UCT, with two joining from other institutions.

"At the beginning of next year we will have 28 master's students in the system, representing a new generation of space scientists," Dunsby added.

"The standard has been very high and we expect at least half of these students to go on to PhD studies."

What has been particularly gratifying, says Dunsby, is the international composition of the students; the programme has attracted students from local institutions as well as those north of South Africa's borders.

The Nassp programme also had two visitors from Caltech who presented seminars as part of the ongoing colloquium series. First up was South African-born Professor Tony Readhead, whose talk was titled The Dark Side of the Universe, followed by Andrew Lang who gave a talk titled Imaging the Embryonic Universe.