Luke Ellenbogen is not afraid of a little elbow grease. 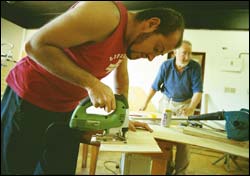 Master of all trades: Luke Ellenbogen works up a sweat as he and dad Nicholas, in background, work on their new theatre in Muizenberg.

And why should he be. The 24-year old, who graduates with a BA in theatre and performance this week, is after all the middle child to celebrated theatre couple Nicholas and Liz Ellenbogen, both UCT graduates, who have built two trademark theatre-cum-restaurants in Cape Town. At the Olympia Bakery Theatre and then the Kalk Bay Theatre, which was adjoined to the Kalk Bay Kitchen, patrons could tuck into a meal before catching some lively stage play, usually penned by Ellenbogen pÃ¨re and performed by family members, a few feet away.

Now they're at it again, converting the old Muizenberg post office into the Post Box Theatre, an 84-seater amphitheatre designed by dad that will sit right next to an eatery, Il Postino, run by business partners. And as has become custom with an Ellenbogen venture, family members lug and hammer and saw shoulder to shoulder with the craftsmen.

That kind of hands-on involvement in all aspects of the theatre gave this year's graduating Ellenbogen something of a head start in class. In particular when he was given free rein in directing the well-received Horn of Sorrow at the Intimate Theatre at the Hiddingh campus this year, a show he also took to the Standard Bank National Arts Festival in Grahamstown. "I think the first thing that my background in theatre taught me is to know how to do everything, because then you're a master of the craft," he says. "A good actor and a good theatre maker is someone who can do carpentry, who can make props, who understands how a lighting board works. And I think my work is the better for it."

Given the family he was born into, it's no surprise that Ellenbogen was weaned on theatre. His first memories are of the stage folk who were forever traipsing in and out of the family home.

Yet despite that early saturation, his road-to-Damascus call to the stage only came much later. Working in Mozambique with the ReportBack Africa theatre company, the family was running a project funded by the World Bank and involving some 20 NGOs. For this they trained a troupe of 17 actors chosen from mostly impoverished areas of seven southern African countries to perform, in their communities, short works that tackled thorny environmental issues. Ellenbogen's epiphany came in the middle of a posh bash in Mozambique when, in front of patron GraÃ§a Machel and a host of stately dignitaries, one cast member casually whipped out her breast to feed her baby. "I just thought, what a moment - what else could bring these two worlds together?"

The experience convinced Ellenbogen that theatre was the life for him. And he's going to be soaked in it over the next few months - as soon as the Post Box Theatre, is up and running he's joining the family for its staging of a Christmas pantomime, and at the same time he's also rehearsing for his role in Much Ado About Nothing at Maynardville. And there are other projects in the pipeline.

Expect this graduate to be front and centre when the work is dished out.