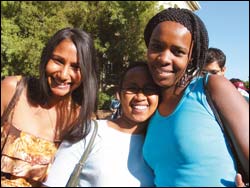 We made it: Final-year medical students (from left) Nerica Ramsundhar, Thandi Giwu and Lusanda Bomela clinch their success.

Having eased the corks to within a whiff of celebration, UCT's final-year medical students waited for the results lists to be thrown from the balcony of the Barnard Fuller Building.

When they did, the students jostled and jumped; shrieking, shouting, dodging fountains of champagne that had erupted like fireworks, drenching parents, siblings and bon vivants who had come to witness the special day.

Fifteen MBChB students achieved first-class honours, about 9% of the class. The top student was Kirstin Coetzee, who walked off with the Barnard Fuller Prize.

There was a 100% pass rate for BSc Speech-Language Pathology and BSc Audiology, both courses offered by the Division of Communication Sciences and Disorders in the School of Health and rehabilitation Sciences.

There was another reason to celebrate; besides toiling over their books, the students managed to raise for the paediatric ward at Somerset Hospital.