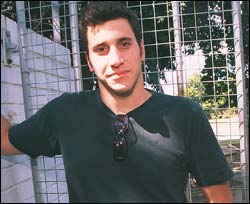 Making a splash: Gareth Samuel is one of UCT's national water polo caps this year

Both the men's and women's water polo teams came unstuck in the finals of their respective Western Province winter league finals recently.

The women, short of their three national players, lost 3-5 to Silvertree, while the men were pipped 3-4 by the University of Stellenbosch. The men will be particularly disappointed at their result, having beaten Stellenbosch twice this year.

But all is not doom and gloom. Even if there's no new silverware, the club still has plenty to brag about. Graduates Christine Haralambous and Penny O'Connor, still playing for UCT, and current student Kimberly Schmidt have all made it into national squads over the year. The three helped South Africa to glory at the North Seas Five Nations Cup in Stockholm, Sweden, last week. (Schmidt celebrated her twenty-first birthday the day after landing back in Cape Town.)

The men also boasted a national cap this year. Gareth Samuel travelled with the SA men to Egypt in March, and will do so again at the Heliopolis championships at the beginning of October.

Samuel, who graduates with a degree in actuarial sciences at the end of the year, says his selection into the SA camp even made him take stock of where water polo features in his career plans. "Playing for South Africa changes your perspective of the game," he says. He may just put the whole actuary thing on hold for a while - once he's qualified, of course - as a turn on the professional water polo circuit in Europe next year seems mighty attractive.

But that's neither here nor there for now. He has a degree to wrap up, and Egypt to prepare for. And following hard on that is a major international competition in South Africa in December, with Cuba, Egypt, Poland and Sweden slated to challenge the hosts for top honours.

Water polo players don't enjoy the glam, sponsor-rich lifestyle of other sporting codes in South Africa, but that does not detract from the thrill of putting on his SA kit, says Samuel. "It's still meaningful. It was an experience playing in March, and I'm looking forward to doing it again next month." For now, he's just soaking up the experience.