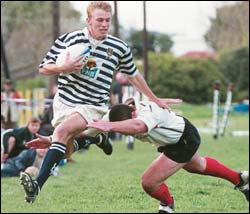 Heading for the line: Richard Hall makes a beeline for the goal line in the FNB UCT First XV's 22-13 win over Villagers.

With the season drawing to a close this week, a number of UCT sides are making a headlong dash for places on the Western Province club rugby logs, and a clean sweep for the club at Villagers on September 4 did their campaigns no harm.

Mathematically, several UCT sides are still in with a chance to clinch top - if not prime - positions. In spite of a gritty 22-13 win over Villagers on September 4, the FNB UCT First XV won't catch up to the University of Stellenbosch first team. But the side can yet steal into second place if they win their last two games (they play Pniel Villagers in Pniel on Tuesday evening) and if results from other matches go their way.

The second side saw their title hopes dashed after a recent draw against NTK 2, but could also make sure of second place this year. The under-21 A1 squad, one point behind Maties, could go one better and clinch their league trophy, but also need favourable results from matches they have no part in.

The only UCT team that has its destiny in its own hands is the third side. Wins in their closing two matches will see the UCT players hold the A3 trophy aloft this week.