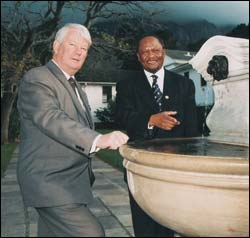 It will be a celebrated homecoming, again illustrating the historic bonds between two of the Cape's oldest and closest institutions. On September 7, UCT's vice-chancellor Professor Njabulo Ndebele will formally hand over the Rosedale Fountain to SACS.

The SACS fountain, constructed of Transvaal sandstone and probably Paarl granite, formed the centrepiece of the Orange Street school quad from 1898 to 1960. It was a focal point of school "traffic" and features in innumerable photographs, drawings and paintings as well as some school boy poetry. School captains were habitually photographed standing next to it on its granite steps.

When the school moved to Newlands in 1960, the fountain was left behind in the quad and later moved to another spot on Hiddingh campus. Gordon Law, the present headmaster of SACS, and teacher Neil Veitch, corresponded over a period with UCT's registrar, Hugh Amoore, and in 2003 the university offered the fountain to its sibling institution as its 175th birthday gift to the school.

UCT also undertook, under the guidance of architect John Rennie, the cost of transferring and refurbishing the fountain - and its installation in working order in the main SACS High School quad. Ndebele will officially switch on the fountain on September 7.