Four in a row for hockey men 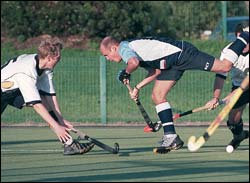 Champions: Players like the experienced Dylan Ball (middle) brought balance to the young UCT side, which has won its fourth successive Grand Challenge title.

And, as in the previous three years, the championship chase again went down to the wire. This time round, UCT needed just a draw against rivals Western Province Cricket Club A (WPCC) in the final match of the season to clinch the title, while WPCC A had to beat UCT to jump to prime spot on the log. Understandably, both sides had a nervous, defensive (more than UCT coach Pierre le Roux had planned for) first half. After a goalless first 35 minutes, Le Roux adopted a more aggressive game plan and it was UCT who broke the deadlock with the first goal of the match early in the second half. Then the dam broke, and UCT wrapped up its title defence with a breezy 5-0 win.

Le Roux had been modest about his side's prospects at the beginning of the year, particularly because he had lost nearly half of his indomitable 2003 squad. This season nearly three-quarters of his players were younger than 21, while the average age in other Grand Challenge squads was around the mid-20s.

But the side was certainly not cowed by their "mature" adversaries. "The players have stepped up way beyond what we expected at the beginning of the season," says Le Roux, who came up with just the right game plan to suit his new squad. "The players just complemented each other so well.

"It was one of those nice years where everything just fell into place. Like a jigsaw puzzle."

The next hurdle for the team is its national Champion of Champions defence in Port Elizabeth at the end of September. Once again, they'll be going up against vastly more experienced rivals, sides that include a couple of national players that competed in the Athens Olympics. The form book says the young UCT will be shown up.

But - as the coach says his team has already shown - anything can happen.