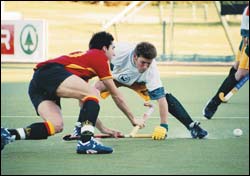 Leading the pack: UCT boasts a number of graduates in the men's hockey side in Athens, including Ian Symons (in white above) and Steve Evans.

The SA hockey teams are brutally honest about their medal prospects at the Olympics.

But don't for a minute imagine that they're in Athens just to quaff down retsina by the gallon and make up the numbers. "The team has never been this well prepared before," says Ian Symons, a member of the men's Olympic side, who finished his medical studies at UCT last year. The 24-year old Symons, who's had to put his internship at Garankuwa Hospital in Pretoria on hold after just two days there, made his national debut for South Africa against Spain early last year, having represented the country at various other levels. But it is only this year that he has really cemented his place in the national side.

The SA side was the last team to qualify for the Olympics - Greece held up the process with a last-minute appeal for automatic qualification, which was denied - and has a hard row to hoe. Ranked thirteenth in the world, SA is in pool B where they will go up against some hockey powerhouses - Argentina (ranked seventh in the world), Australia (3), India (6), Netherlands (2) and New Zealand (11). According to Symons, the men's side wants to finish in the top eight or even - a real bonus - in the top six. The team has targeted a couple of sides they believe they can best. As for the rest - where better to cause an upset or two than at the Olympics? Symons remains guarded, however. "We're fairly confident," he says. 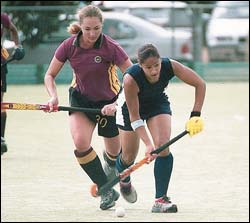 Kerry Bee, UCT player/coach (she's now handed the coaching mantle to Charlie Stuart), and her UCT and national teammate Liesel Dorothy, are more upbeat, though. Also ranked thirteenth - the lowest among the Olympic qualifiers - the SA women's team has been drawn with Australia (2), Germany (7), South Korea (8) and the Netherlands (3). Good series against Spain (ranked sixth) and Australia in the run-up to the Olympics has boosted the team's confidence, however. "We're there to win," said Bee.

Dorothy concurs. "I think the team definately has a chance of doing very well, but the competition, I'm told by the more experienced players, is the closest it's been in a long time. So on a given day anything can happen. Hopefully it'll happen for us on every given day."

At 29, Bee is one of the veterans of the side, having seen action at the Sydney Olympics - "I was Bambi in the headlights" - as well as a couple of World Cups and Commonwealth Games. For Dorothy, it's all going to be new, however. She moved to Cape Town and UCT from Port Elizabeth early this year to surround herself with top players and rev up her game in preparation for Athens.

Being the baby in the national side - although she doesn't have the least caps - has made things easier for her, she said from Athens last week. "Playing with the older, so-called veterans really is great because I can just go out there and play and leave all the pressure to them to do the rest." The older "girls" have been really been supportive, however. "They've really helped us to deal with the so-called 'Olympic vibe' which apparently can become quite a thing with youngsters."

No more doe-eyed Bambis in the headlights, then.