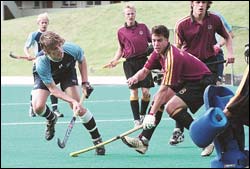 The beginning of the end: After going 0-1 down early in the first half, Sean Thomson (left) scores the first of UCT's five goals against Maties.

After nearly shooting themselves in the foot with an unbecoming defeat to Western Province Cricket Club (WPCC) two weeks ago, the men's hockey first team is back in the running for Grand Challenge honours.

In fact, the team has jumped to the top of the log standings following a 5-2 win over the University of Stellenbosch on Saturday, July 31, in the last league encounter for the year (teams now move into a round-robin season decider). After conceding an early goal to Maties, UCT picked up the next five before allowing their rivals in for a late score.

UCT now shares pole position with WPCC, with Central in third place. Central had a chance to scorch ahead of the other two teams, but a defeat and draw over the same weekend scuttled those plans. All three sides have played the same number of games, so results in the top-four round robin games are going to be crucial. Fourth-placed Pinelands, who will also play in this event, is unlikely to catch up to the other three, but could still play a crucial role in deciding who walks away with the silverware this year - a win or draw against any of the other sides may just spell the end of someone's campaign.

But Pinelands may not want to do UCT any favours - it was after all UCT B that dashed the community side's lingering championship ambitions by outscoring them 3-2 on August 1. For UCT B, the surprise win - which followed on a 0-3 defeat to Fish Hoek two days prior - has just about guaranteed the UCT second side a place in next year's Grand Challenge league. They're now well clear of bottom club WPCC B, who appear set for relegation.