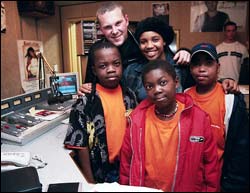 But Steven Taylor, popular and ambitious Monday drive-time DJ at UCT Radio, wants to influence people as well. So recently he called up the Reach for a Dream Foundation - which helps kids fight life-threatening illnesses by encouraging and assisting them achieve some of their aspirations - and arranged for three kids to spend some time at the station.

Taylor wanted to make sure that his guests would not forget their stopover at UCT, and lined up a procession of special guests and activities for 14-year old John Grispe and Makabongwe Manga and 11-year old Luvo Sokapase, all from St Joseph's Home in Montana. Apart from a tour around the studio to check out the station's CD collection - the three are crazy about hip-hop and kwaito - the boys also met Proteas cricketer Ashwell Prince, fired questions at former president FW de Klerk during an on-the-air telephone interview, laughed themselves silly at the antics of blustery Big Brother South Africa winner Ferdinand "Ferdi" Rabie, and posed alongside the pint-sized, honey-chorded Poseletso Sejosingoe of Idols fame.

Although none of the boys had considered a career behind a radio microphone, they - shyly - reported that they had enjoyed their afternoon outing to UCT. Although it did appear that speaking to a former president was more of a thrill than meeting television celebs.

Taylor is ecstatic about the boys' response to their time at UCT. "They were overjoyed," he reported. Which means that he's realising some of his own dreams. "Being a DJ is not about me becoming famous. It's about doing something with that fame and with what I do, and reaching out to the community and doing something for them."

By all accounts, last week's visit was a dream start to a programme Taylor hopes to make a feature of his slot.