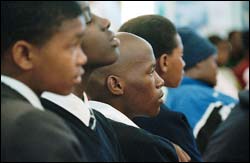 All ears: Learners pay close attention to speakers at the careers day organised by GSB graduates in Langa on Youth Day.

"Once is not enough" could be the maxim of a bunch of tireless graduates from the Graduate School of Business (GSB).

Last year, members of the school's part-time Associate in Management (AIM) class organised and hosted a careers information day for learners at Ikamvalethu High School in Langa. This was but one of a number of "outreach" events that the class arranged as part of the social responsibility component of its studies at the GSB.

On Youth Day this year, with no lecturer and no year-mark to consider, 10 graduates-in-waiting - it was just two days before their UCT graduation - from both the 2003 part-time and full-time AIM classes returned to Langa for a second run of the event.

And the group had even larger ambitions this time around. While the class had concentrated on one school in 2003 - Ikamvalethu - they had targeted learners from eight high schools in the township this year. And not only did they invite current grade eight to 12 pupils, but also those school leavers still in need of advice.

There was plenty to learn and many to learn from on the day. Among those to host information stalls were members of the current MBA class, who shared some insights from their working lives, as well as event partners Cape Tech, the University of Stellenbosch and Northlink College. Representatives from the Department of Labour also addressed students during the day.

It wasn't all work either, with a number of entertainers providing light relief between sessions. Organisations such as the Department of Labour, Engen, Lloyd's Register, PSP-Icon, Shell and Standard Bank all provided sponsorships.

According to Ingrid Kalie, a member of the organising committee behind the event, the group wanted the careers day to be more than just a hit-and-run occasion. "Feedback from the community last year showed that there was definitely a need to have something like this again," she said.

The group will be back, promised Kalie, although - such is the demand - they are considering spreading their good news in another community in 2005.