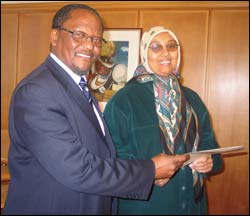 Stepping up to take the challenge: Vice Chancellor Professor Njabulo Ndebele congratulates Abieda Abrahams on becoming one of the first staff members to make a pledge to the Chancellor's Challenge 175 campaign.

When UCT's chancellor GraÃ§a Machel, launched the Chancellor's Challenge 175 (CC175) she had already made a significant personal contribution and called upon students, staff, donors and alumni to pledge regularly over the next five years. She urged members of the UCT community to renew their commitment to society by helping to raise R175-million to put needy students through university. Her call to the UCT community to "bestow a gift of knowledge, a gift of unimaginable proportions on the next generation of UCT students" has touched hearts and minds and a number of UCT staff members have heeded the call.

Abieda Abrahams from the Department of Communication and Development (DCD) was one of the first staffers to pledge to the CC175.

Abrahams, a financial assistant who has been a UCT employee since 2001, pledged R175 in an attempt to get the ball rolling. She has also pledged a monthly donation for the next five years.

A bookkeeper with over 27 years' experience, Abrahams believes the campaign is a worthy cause that will benefit many individuals.

"Some people are very easily jaded if they think the money is going into someone else's pocket. But we are aware of where this money is going and, who knows, it might even be my grandchildren who benefit from the bursaries one day."

For Abrahams, education is very important and although there were many missed opportunities in her own life, she is quick to point out she is fortunate to be given the chance to further her studies while working at UCT.

UCT's registrar, Hugh Amoore, is another employee who has become a member of a UCT community that, according to Machel, is "one in which members accept collective responsibility to ensure the world-class institution thrives, to the benefit of all the generations of students to come".

Speaking to Monday Paper, Amoore said he always believed members of the university community and past students should contribute to UCT's endowment.

Amoore, a regular contributor since 1977, said the Chancellor's Challenge was another way of continuing this.

Rhona Nieuwoudt, previously from the HR department and newly-appointed DCD relationship manager for corporates and trusts, has also embraced the chancellor's appeal. For her, it is an opportunity to create a diverse workplace.

"Transformation is close to my heart," she explained. "Contributing to the campaign allows transformation to begin on the inside of every donor. It then becomes externalised and fosters the transformation of UCT into a proudly African university.

"It's about doing something and not merely paying lip service to the challenge," she added. 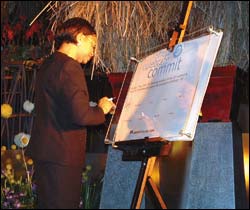 Chancellor GraÃ§a Machel commits to support the Chancellor's Challenge 175 at the launch ceremony.

According to Professor Frank Horwitz, director of the Graduate School of Business and another keen donor, contributing to the campaign assists in the development of human capacity.

"UCT faces huge challenges, but if all staff can contribute just a little extra, beyond what they do in their day-to-day jobs, then we can work towards ensuring sustainability in the long run."

Half of every rand raised for the Chancellor's Challenge 175 will go towards the UCT undesignated endowment fund, securing financial stability for the university.

An endowment refers to donations received as part of a fundraising campaign that raises money for an organisation to invest rather than spend. The principal amount is held in perpetuity while earnings are spent primarily on activities and projects deemed critical to the mission and strategic objectives of the university.

By growing UCT's endowment fund, the institution reduces the need to raise money each year to cover operational costs or to raise money for occasional extraordinary expenses.

The other half of every rand raised will be put towards financial aid for needy students and will see a cohort of 175 students, called the Chancellor's Scholars, undertaking degrees in the various faculties. These scholars will receive the financial aid on condition they, in turn, become donors to the next generation of students - whatever the amount - when they have left UCT.

Securing adequate levels of funding to support financially and educationally disadvantaged students is one of the most critical issues facing higher education in South Africa.

But by making a contribution to the campaign, donors are playing a pioneering role in making tertiary education accessible to all, while supporting UCT's efforts to transform the demographic profile of the university's student population. It also aids the growth of the pool of qualified professionals corporate South Africa requires to meet its own equity targets.

As Machel said at the launch of the campaign: "I urge you to ensure that our gift is the water at the roots of the tree that bears education as its fruit. Let our sacrifice be to ensure access, into perpetuity, via the doors through which generation after generation of Africa's children will walk into a brighter future for themselves, their families, their society and ultimately, this continent."

Those staff members wanting to pledge their support are encouraged to contact Farah Carr or Rhona Nieuwoudt from the Chancellor's Challenge 175 Campaign Office in the Department of Communication and Development. They can be contacted on tel 650 2641 or e-mail fcarr@bremner.uct.ac.za or nieuwoudtr@bremner.uct.ac.za