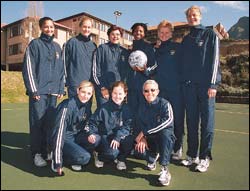 All dressed up: The UCT netball side show off their new tracksuits before heading for Potchefstroom where they successfully defended their SASSU title.

UCT has won the B section of the SASSU netball games, contested in a wintry Potchefstroom two weeks ago.

UCT, its squad made up of four players each from its A and B sides, won all its qualifying matches before beating Wits University in the semi-final. The side then ran away with the final, thumping Cape Technikon 44-27 despite losing one pivotal player to a bout of chicken pox just before the match.

Some squad members may have appreciated the SASSU success a bit more than others, said club chairperson Juliet Birch. "The four A side players were particularly happy with the team's performance after a disappointing season in the Western Province [Super] league."

Captain Palesa Mokomele, one of the star performers during the competition, was one of those thrilled with the triumph. "It was the greatest feeling ever to win again," she said. "It made us realise that we're still very good players - it's just that the Super League is such a great challenge."

Both Birch and Mokomele credit coach Elfreda Luyt's back-to-basics approach and the cohesion among team members for the win. And the side certainly caught the eye of umpires and organisers, who lauded its high standard of play, good manners and clean play.