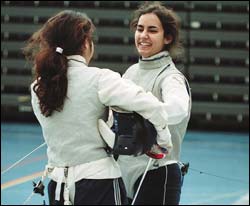 They were the no-hopers of last year's SASSU games.

But the UCT fencing team turned the tables on their rivals when it just about swept the board at this year's competition, staged at UCT in June. UCT, for example, clinched the team medal at the event, taking top spot from the universities of Natal, Pretoria, Stellenbosch and Wits, and the Rand Afrikaans University (soon to become the University of Johannesburg).

In addition, Julian Smith (epÃ©e) and Taariq Mullins (foil) won gold in their events. Similarly, the men's side picked up the winner's medals in the epÃ©e and foil categories.

Mullins also stole the show with his overall performance, and was named as the competition's Master of Arms.

The UCT women couldn't quite match the men's high standards, although Tracy Booysen, the UCT armourer, did walk off with bronze in both the epÃ©e and foil.

Club chairperson David Xu couldn't have been more pleased with the UCT fencers, especially in the light of the 2003 performance. Everybody had upped their games from last year, he noted.

"Nobody expected us to win, so I'm incredibly proud of the results."

Everyone is agreed, then, that the UCT fencers have made their point.