Neither rain nor mud can hold UCT back 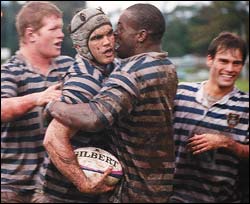 Mud in your eye: Captain David Ricketts (with ball) is congratulated by Vakai Hove and teammate Stephen Knoop after scoring UCT's first try in the game against Villagers.

It doesn't take much rain to turn the UCT rugby field into a mudbath.

And understandably, the quality of the rugby suffers when players are slipping and sliding their way through a game, and the ball won't stick to hand.

Or so one would think. On Saturday, June 5, FNB UCT turned their muddy encounter with Villagers around with an unlikely - and probably not advisable - display of second-half running rugby. "You'd think they're playing on hard ground," observed one bystander.

Down 0-10 at half-time, UCT made good use of the strong north-westerly wind at their backs in the second half and hardly allowed Villagers a look-in. Instead, they kept the pressure on their rivals with strategic kicking and many a surge either down the middle of the park - Vakai Hove and Immanuel McKenzie stood out - or along the wings.

It was with another foray along the left side of the field that skipper David Ricketts, again the most voluble on the field, put UCT back into the game with a try about midway into the second half. Two penalties by SA under-19 regular Isma-eel Dollie then gave UCT a slender 11-10 lead late in the game.

The scoreline galvanised Villagers, who made one or two incursions into the UCT half, but to no avail. Dollie sealed the game for UCT when, in the dying moments, he took a fingertip interception close to the Villagers goal - pressure by McKenzie forced a poor pass from the Villagers scrumhalf - and belly-flopped over for a try, which he also converted.

The 18-10 win took UCT to third place in the final standings of the Super League A first round. Villagers had to settle for ninth position.