Cycling club cranks up the action 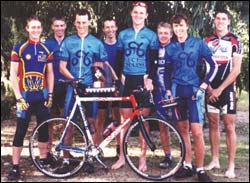 Take a break: Members of the UCT Cycling Club catch their breath as they gear up for a busy season.

Over the past few years, UCT has had few top-level cyclists.

This season, however, the UCT Cycling Club boasts a squad of nine cyclists that has been competing in the Pedal Power Association league, which attracts the highest level of competition in the Western Cape.


Since a new committee, chaired by Adrian Roff, took over the running of the club in October 2003, the club has gained the commitment of its members to establish a racing team. This was achieved through a series of training rides and camps, and the team has become a reality following many hours spent in the saddle by the cyclists.

The Cape Argus Pick 'n Pay Cycle Tour always draws strong participation from the club, and this year about 40 members completed the 108-km route. Fourteen UCT cyclists finished in under three hours, which shows a big increase in depth. Neil Timm rode in the invitational category, and posted the fastest time in the club of 2:37:59.

A UCT team - George Carvounes, Stuart Lemanski, Ian McClarty and Will Robinson - won the tertiary education category, and was recently awarded a floating trophy and silver medals at the Argus prize-giving. The riders' average time was 2:49:36, and the team was third-fastest overall (invitational riders excluded).

The team is currently preparing for the SASSU Intervarsity Road Race in June, hosted this year by the Tshwane University of Technology in Pretoria. It is a three-day, five-stage tour and attracts several of South Africa's top provincial cyclists. For most students, the SASSU cycle tour is their only opportunity to participate in a stage race event.

Three training camps have already been held and the team will be trying to squeeze in some 1 000-km of hard cycling in between exams over the next few weeks in preparation for the event.