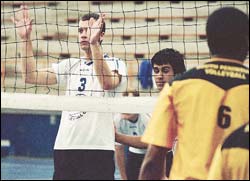 The women's volleyball first team cemented their reputation as giant-killers designate of the WP premier league when they bested league leaders Saints by 3-1 on Monday, May 17.

The win has been described as one of the biggest upsets of the season. It follows on surprise UCT victories over South Peninsula and the University of Stellenbosch earlier in the campaign.

According to the club's Anneke Voigts, the match was expected to be a close encounter. Instead, UCT, after losing the first set, walked away with an unexpectedly comfortable but very welcome triumph, reported Voigts.

Coach Simeon Davies has attributed his side's victory to his players' dedication and hard work over the past one-and-a-half years. "Everything that we have done over the last two seasons came to fruition in that game," he said.

"The spirit in which we play the game is something to be proud of."

The UCT men also tasted victory on the evening, beating the Saints' men side 3-1. The win was a satisfying comeback for the team after they went down 1-3 to South Peninsula the week before.