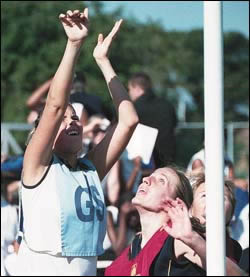 Eye on the target: Goal shooter Lushinka Scott is among the players that UCT will be looking to to turn its fortunes around.

The UCT first team is finding its first season back in the WP Netball Super League a tough ask, but captain Palesa Mokomele believes the side has what it takes to thrive in the top flight.

UCT was on the wrong end of a 17-40 drubbing from Tygerberg A in its official season-opener on April 24. Things got worse when they were trounced 21-65 by Bellville A in their next match, played on May 8. The defeats - albeit against the two best sides in the league - prompted Mokomele to sit her players down for powwow on what's gone wrong with the season thus far.

The poor results, notes Mokomele, may have something to do with the side's belated start, which is partly the result of the late opening of campus in February. By the time the UCT players get together for their first practice, other sides would already have been going for at least a month. "So at this point, we're still very unsettled," the skipper says.

One of the team's most dedicated supporters, Charles Scott, father of goal shooter Lushinka Scott, argues that it is only understandable that the young UCT side will struggle against the seasoned players of the Super League teams. "It's going to take time," says Scott, who's to be found at nearly every first team game.

Another worry is that the players will be overawed when they go head-to-head with some of the country's big names - including former SA captain Bronwyn Bock-Jonathan - who feature in the Super League. "We need to be very positive, especially because we're playing against teams we always look up to," notes Mokomele.

"That's very intimidating, but we are very strong, both individually and as a team. In terms of potential and skills, we're on the same level as everyone else. We just need to keep our heads up, and work as a cohesive force again."