UCT's foot comes off the pedal 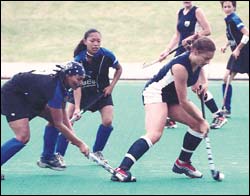 Pushing on: UCT's Tammy Kruger (with ball) tries to get an attack started, but Central's Larissa Smith (with bandanna) and Rashida Petersen keep a close eye on her.

The side's at the top of the log, but the UCT women's first team may feel they let themselves down after managing only a one-all draw against lowly Central on Saturday, May 1.

After amassing 18 goals and three bonus points over their first three matches - against some very talented competition - UCT expected to land yet another bonus point against Central. Instead, their goal spree dried up.

To coach Charlie Stuart's dismay, UCT found itself 0-1 behind at halftime, but Lauren Seaman netted an equaliser early in the second half. That, however, was all they could manage for the game as Central tenaciously held out for a valuable point.

UCT now leads Stellenbosch by two points at the head of the WP Grand Challenge log, but, figures Stuart, the 1-1 draw against Central may have set UCT back a bit, especially as Maties have a game in hand. "We've lost some ground because of the [Central] result, but we're still in there," he says.