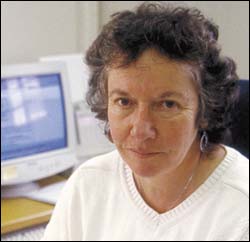 Is UCT producing graduates who are capable of critical and creative thinking, who can contribute to the economic and diverse social needs of South Africa, while building a vibrant civil society and consolidating the new democracy?

These are all questions that UCT's first Social Responsive Report seeks to answer in what will become an annual survey of how academics are responding to the needs and problems of society, at the local, regional and global level.

The Social Responsiveness Report is a companion piece to two other university-wide reports, namely the Research Report and the Teaching and Learning Report, which are aimed at measuring output in these key areas.

Judith Favish and Vakele Nobongoza of the institutional planning department and Janice McMillan, assisted by Bafedile Morake, both at the Centre for Higher Education Development, compiled the report.

Favish, who is the director of institutional planning, says this first report is intended to stimulate debate and discussion about what people understand social responsiveness to be. She stresses that it is not set up in opposition to any of the university's basic research initiatives. The objective is to make socially responsive work more visible and also to recognise those individuals who are involved in these social initiatives.

For instance, within the Faculty of Health Sciences, much of the research is aimed at the production of new knowledge, and the benefits may not be known until some point in the future. However, the results could potentially yield significant improvements in the quality of peoples' lives.

Favish says the challenge is to develop ways of recognising contributions to development through research, service learning or the curriculum, that can't easily be measured with traditional tools. "The focus is on how we engage with development issues through our core activities."

A useful spin-off will be the development of a database listing university-based activities that address the strategic priorities of the region, be they in industries such as tourism, agriculture and fishing, or developmental needs such as housing.

The report findings are based on an audit of teaching, research, community service and policy engagement. The audit was done through a questionnaire, sent to all heads of department and heads of research units on campus, as well as to other networks and individuals. This questionnaire elicited a 32% response rate, in line with similar surveys, most recently the Organisational Climate Survey. In addition, a focus group discussion was held in the law faculty.

The audit found there were many ways in which UCT academics were helping to address the many needs and challenges of African society. Examples include numerous units set up to deal with specific issues, such as the Women's Health Research Unit (looking at cervical health), or the Institute of Criminology, which is linked to the Department of Criminal Justice.

However, it also found that many examples of outreach or community service happened outside the formal curriculum and were not linked to any research initiatives. In addition, much of the "socially responsive" work is often donor funded. The effect of this is that contract staff without tenure or the opportunity for promotion are doing much of this work.

Most of the socially responsive activities were directly associated with research, but there were also several examples of the inter-relationship between the curriculum and social responsiveness. A significant example here was the restructuring of the MBChB curriculum to reflect a changed social reality.

There were significant differences across the university which reflected whether academics were located in career-oriented faculties (such as commerce) or faculties primarily involved in providing formative or disciplinary education (like humanities).

The former were more likely to draw on the social context to meet the needs of employers outside of academic disciplines.

Favish suggests that social values are critical in explaining the extent to which individuals engage with South Africa and the African context in general. The counter view is that other factors come into play, for instance the commitment to providing a solid foundation to disciplines before focusing on social applications.

In addition, the general consensus among the respondents was that responsiveness and engagement were not formally recognised or rewarded. Respondents suggested that incentives should be built into the system to encourage social responsiveness.

Because of the 32% response rate to the audit, the intention is to gather more comprehensive data in future to generate baseline data on the full range of work being done at UCT.

Anyone wishing to get a copy of the report or to express a view on the definition of social responsiveness at UCT should contact Judy Favish (ext 2180 or by e-mail at jfavish@bremner.uct.ac.za) or Janice McMillan (ext 2894 or by e-mail at jmcmillan@ched.uct.ac.za).