Not frazzled with fabulous Fran 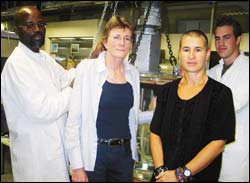 Initially appointed as a scientific officer in a small research group, Fran Pocock has subsequently had to shoulder the entire administrative burden of a group that has grown rapidly and now includes three postdoctoral researchers and seven postgraduate students.

And despite an enormous increase in her workload, the staff and students of the Precipitation and Crystallization Research Facility are quick to point out that they have yet to see Pocock "depressed or angry".

In fact, they say, it is quite the opposite, with Pocock excelling even when placed in unfamiliar territory.

"Fran has mastered the intricacies of the UCT bureaucracy, is a whiz with my financial management, knows the who's who and what's what in every relevant research organisation in South Africa (and some abroad) and is loyal and dedicated far beyond the call of duty," said Associate Professor Alison Lewis, who nominated Pocock.

"Without Fran, I would be a frazzled and grumpy wreck. With her in my work life, I enjoy my research activities tremendously."

Regarded by many students as the most important person in their lives, Pocock has been described as an "infinite source of wisdom".

PhD student Ochieng Aoyi continued to sing Pocock's praises: "I initially found it difficult to call Fran by her first name. She is so caring and profoundly respectful of her work and everyone that she deals with, that one finds it difficult not to respect her. For some time I called her auntie Fran, however, the humble 'mother of precipitation' did not allow me to proceed with this."

Aoyi went on to say that Pocock, who is a meticulous worker, finishes all her work with the precision of a surgeon and is always available to assist students with their problems - be they academic, financial or social.

Pocock, who has been a UCT employee for the past 12 years (previously in chemistry and geological sciences), is an avid long-distance runner, having taken part in the Two Oceans a phenomenal 15 times.

"With running, much like at work, it is the sum of the parts which is greater than the whole. It is about the places and the people that you meet while you are running that makes you get a lot out of it."

Trained as a medical technologist and more at home in a laboratory, Pocock has not let her lack of financial training hamper her efforts.

"I don't even handle our cheque book at home, my hubby does that, and yet here I am working with millions of rands worth of research funds.

"I'm gob-smacked by the nomination because I'm more of a team player and don't like to be singled out," she added. "We all work as a team here, and when I don't know something I simply go to someone who does to find out. Maybe asking for help is an age thing, but I find it works for me."