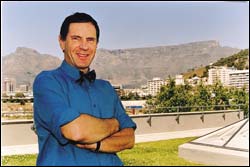 Prof Frank Horwitz, the GSB's new director, has considerable international experience, having lived and worked on four continents, including stints in Canada, the United Kingdom, Singapore and China.

Frank Horwitz is the new director of UCT's Graduate School of Business. Horwitz, a long-time professor of the GSB, was given the top job earlier this month and will lead the school in an important stage of its development for the next three years.

In making the announcement, DVC Professor Martin West said Horwitz was a distinguished and experienced academic who enjoyed the confidence of his colleagues at the GSB and was well-suited to the challenge of leading the school at a challenging time in its history.

His appointment has been especially popular with the GSB staff. "I have had terrific support from my colleagues," Horwitz confirmed.

A world-renowned specialist in human resources and organisational change, the new director has been a member of the GSB faculty for 18 years, with previous stints at Wits Business School and 10 years in the corporate world with AECI and ICI in the United Kingdom.

He is respected both as an academic, with four books and more than 90 refereed articles and book chapters to his name, and as a consultant. He has lived and worked on four continents, having enlisted with a number of companies as well as with governments in Canada, Namibia and South Africa, assisting them with issues relating to organisational change and human capital strategies.

Horwitz, who was previously academic director at the GSB, said that he was looking forward to his new role and that he planned to set a course to make the business school more relevant to the transformation and development needs of South Africa as it entered the next decade of democracy.

This would include accelerating the demographic transformation of the staff and student body, and further differentiating the GSB as a leading niche player in management education and research in emergent economies and societies undergoing transition.

"While graduates have to be competent and skilled in managing in a global context - that context is very diverse. Enhancing their ability to manage in diverse cultures and markets is a critical contribution that the school will be looking to make," he noted.

To achieve its aim, Horwitz wants to increase the number of alliances that the GSB has with other institutions and organisations in Africa. He will also be looking further afield to non-African emerging economies - notably East Asian markets - to foster an Afro/Asian nexus.

"We feel that we need to look north (into Africa) and to the East to add to our links with business schools in developed economies. This does not mean that our links with business schools in developed nations will suffer. Such links will remain vital to us," he explained. "It is about broadening our focus. We aim to establish a powerful synergy of Western/African and Asian perspectives on business that will benefit our students and ultimately our country.

"We believe that we are doing something special. While comparisons between the East and the West are not unusual, there has been neglect in building links - be they trade, political or cultural links - between Asia and Africa. This represents a gap in the research and education market and therefore a significant opportunity for UCT."

Neither is he daunted by the prospect of having to work hard to achieve his aims. He said the business school had come a long way since it was established 40 years ago and had always tried to keep itself fresh and relevant. The next stage of its existence was a natural extension of this but added that it was not a stage he would be embarking on alone.

"The strategic positioning of the school can never be a function solely of the director but is a collaborative effort by everyone working at the business school."

Off duty, he is a passionate cyclist (he completed his 13th Argus Cycle Tour this year) "though my cycling career is at risk with my new career challenge at the GSB", he added.

In true Cape tradition, Horwitz enjoys red wine and is a "mean" guitar player, a musical tradition that seems to run through the senior echelons of the commerce faculty, to which the GSB is attached. Dean of commerce Professor Doug Pitt is an accomplished banjo player, though Dixieland may be more than a few steps removed from Horwitz's style.

He describes himself as a versatile player - rock ("heavy metal too") blues, a little jazz and even some classical.

"Doug Pitt and I could possibly do a 'duelling banjo/guitar' gig, but I am not sure that too many people would dare subject themselves to this," he quipped.

There are also close family bonds to UCT. Horwitz's eldest daughter, Justine, is a human resources honours graduate from UCT and his second daughter, Michele, a third-year fine art student at Michaelis.