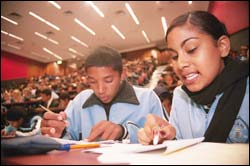 Crunching the numbers: Learners tackle some tricky problems at the UCT Mathematics Competition.

Some 6 000 learners flocked to UCT last week to flex their mathematical muscle at the 25th annual UCT Mathematics Competition.

The learners, spanning grades eight to 12, came from as far afield as Citrusdal, Victoria West, Beaufort West, Prince Albert and Oudtshoorn to take part in the event, joining regulars from schools in Cape Town's southern and northern suburbs. About 200 maths teachers, hailing from a sweep of schools, assisted in running the event.

On offer for winners were calculators awarded by Casio, and book prizes donated by Oxford University Press. These pickings, together with certificates and trophies for the top schools, will be presented at a prize-giving ceremony on Wednesday, June 2, in the Baxter Concert Hall.

"The competition is a very popular event," said Professor John Webb, who has been involved with the contest even before it moved to UCT in 1979 from Westerford, the high school that initiated the event. "Rivalry between schools for honours is intense."

With grade inflation of matric results and an A symbol in matric maths much easier to obtain in recent years, a top result in the UCT Mathematics Competition could be the deciding factor in winning a university bursary, added Webb.

In addition, the competition's top performers will be invited to take part in the Canadian Invitational Mathematics Challenge, to be written in May. They will also be short-listed to represent Western Province in the Interprovincial Mathematics Olympiad, to take place in September.

"For the very highest achievers, there is the chance of selection to represent South Africa at the Pan African Mathematics Olympiad and the International Mathematical Olympiad," said Webb.