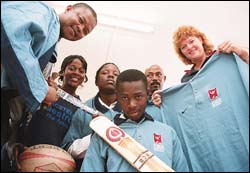 Dressing up: Zola Pahlana (far left), principal of ID Mkize Secondary in Gugulethu, and some of his learners show off kit and equipment donated to the school by the Sports Science Institute's Mercia Erens (second from left, back), Eric Sikunana (second from right) and Gill Taylor.

The men and women of the Sports Science Institute of South Africa (SSISA), home to many UCT sports scientists, are a hard-working lot, but they'll be the first to admit that they enjoy some spiffy perks.

Like the new uniforms - fresh colours and outfits each year - lavished on them by generous sponsors. As a result, T-shirts and shorts from previous years, many still in their original wrapping, go a-begging and forgotten at the bottom of drawers and cupboards.

But Gill Taylor, co-ordinator of the institute's many outreach projects, rightly considered this something of a wasted opportunity. So, she approached both the SSISA's former sponsors, Adidas, and the current one, Nike, and asked if they had any objections to her dishing these out to needy schools.

Taylor then called on staff at the SSISA to donate any unwanted outfits to the project. The response was overwhelming - the barrage of T-shirts and shorts were soon joined by a slew of sporting goods, with everything from cricket bats to golf clubs (somebody either gave up or got married), rugby balls to swimmers' nose-plugs eventually ending up in boxes and bags in Taylor's office.

After a look-around, Taylor and some colleagues decided that ID Mkize Secondary in Gugulethu - Taylor had served as the township's cricket co-ordinator until 2000 - would make a suitable beneficiary. Recently, they drove out to the school and handed the kit over to the principal, Zola Pahlana, and teachers.

It is planned that the uniforms will adorn the school's respective sport teams, who will also take charge of the rest of the gear. And, every year, Taylor will drop off additional uniforms as SSISA staff receive their new ones. In a few years' time, the school teams will hopefully each boast their own uniforms, said Taylor.

Pahlana was over the moon. Schools have to fend for their own sporting needs, he explained, and many squads at ID Mkize have neither equipment nor kit. In addition, government initiatives like the Sport Stepping Stones Scheme are yet to deliver on their promises to provide these.

"I'm a firm believer that sport can go a long way at schools as far as addressing issues like retention, curbing truancy, developing young people's talents and the overall development of our learners," he said. "So we gladly accepted the institute's offer."

"We have a wonderful outreach department at the Sports Science Institute," Taylor told teachers on the afternoon, "but we feel that we haven't really made an impact on the local community.

"We just hope that we can lighten your load by giving some kit to your students, and in that way give them a better sense of team awareness."