Close but no cigar for cricket team 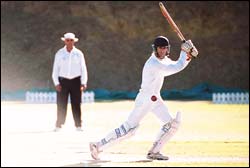 Off she goes: Richard Short cuts square during his innings of 16.

League champions the year before, the side had to cede ownership of the Western Province club trophy to Almar on Saturday, March 27, pipped by just 0.75 of a point at the top of the A1 log. Almar also bagged this season's one-day trophy.

UCT went into the last day of their match against Victoria - and the last day of the season - with only an outside chance of regaining the title, needing not only to win their game, but also requiring Midmar Bellville to beat championship-rivals Almar in their clash at the Bellville Cricket Ground. That seemed unlikely to happen as Bellville had managed only an embarrassing 58 runs in their first innings on the previous Saturday, March 20, in response to Almar's 240/6. The Bellville boys saved themselves a few blushes, however, by knuckling down for the second innings and piling on some runs in their follow-on innings. And on 267/7, the two sides decided to call it a day and settle for a draw, enough to secure Almar the 2003/2004 title, and dash UCT hopes.


Back on the university oval, UCT was pushing for a victory regardless - and Victoria (168 and 271) was making them sweat for it - needing to score 161 off 37 overs in their second innings for a win. After a slow start to their chase, useful knocks by 40-something Brian McMillan (38), Richard Short (16, as well as six wickets in Victoria's second innings) and flu-ridden skipper Neil Kruger (35) put them nicely on track.

But with the light fading fast, it demanded a breakneck 52* (including 12 runs off the concluding over) from Wesley Morrick to hurry the side to its target, the final runs coming in the 33rd over.

Sadly, Morrick's Herculean effort was not enough to topple Almar from the prime spot on top of the log.