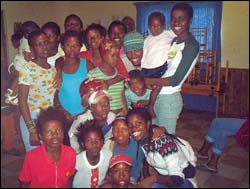 TLC: First-year medical students and their young charges at the Baphumelele children's home in Khayelitsha.

No sooner had they found their way around the hallowed halls of learning in the Health Sciences Faculty, than 61 first-year students were whisked out to the sprawling township of Khayelitsha to visit a number of local projects, providing a vastly different orientation and learning experience.

Many had never visited a township, few had any idea of the scope and nature of community work in the area, particularly in the HIV/AIDS arena, said Cathi Draper, who organised the excursion.

First up on the tour were visits to two children's homes, Fikelela and Baphumelele, where the group were invited to interact with the children, later helping with daily tasks like bathing and taking temperatures.

Swopping thermometers for building trowels at Baphumelele, the students teamed up with UCT's Habitat for Humanity society, which has been doing some building for the institution. Other students dipped paintbrushes and transformed a newly-built Habitat home.

Afterwards, said Draper, there was a jaunt to the Khayelitsha Craft market and entertainment by the St Michael's Marimba Band while enjoying a "lunch typical of Khayelitsha": vetkoek and chips!

General consensus among the students was heartening. Many left feeling challenged. Comments ranged from: "The endurance and courage of the human spirit was demonstrated beautifully in the children's homes", "If we are to be empathetic doctors, we need to be exposed to different spheres in society", and "A good wake-up call to realise the destitution on our doorstep and make us aware of how lucky we are and how much other people need us".